Exams are always tough, even the Payment of Exam Fee is

Its August 24, 2013. I visited Indian Overseas Bank, Saidapet to deposit an Exam Fee towards University of Madras. I was told to stand in alternative queues, as if they (Bank employees) themselves are not sure, which counter is to pay the Exam Fee. After nearly 2 hours of wait, the bank staff advised me to pay the fee in some other branch, because of some server problem.

I then filed a Complaint in IOB Online redressal system… No response… Followed it up with Complaints to Chief Regional Manager & Principal Nodal Officer through mail; After which I was given response from Branch Manager that it is because of Server problem that the service is denied on that day. Unsatisfied with the genuinity of the response, I appealed to Chief Regional Manager against the resolution of Branch Manager vide Registered Letter.

On October, The Chief Regional Manager closed the complaint stating the server movement was little slow, however all the customers’ requirement were met and he declared that there is no deficiency of service on the part of the branch.

The Cycle repeats itself

After around 6 months, in the month of April, I went to same branch to pay the exam fee again. This time I decided to videotape the series of events that are about to happen, since that would help me in our further efforts, if the service is not provided properly. This time I waited for an hour, approached different desks as suggested by the Bank Staffs, video taping with my mobile camera. 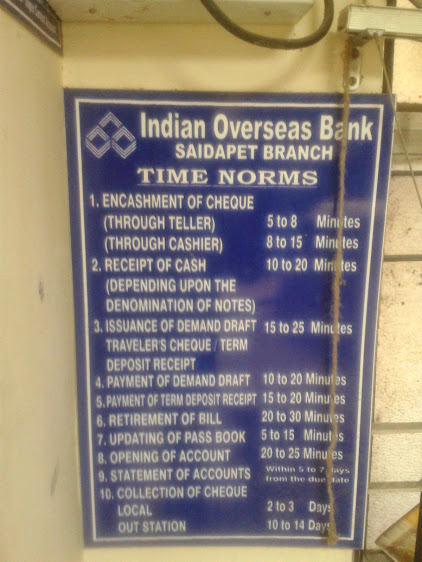 Unfortunately, the Bank Peon saw me video-taping and there started a big hassle. Most of the Bank Staffs rounded me and a heated argument started, followed by the bank staffs physically harassing me, pushing me down by a staff wearing black shirt and gray stripes and very unfortunately I even got a punch in the face.

Though I couldn’t continue videotaping after they try to snatch the phone from the hand, I strongly believe the whole incident could got recorded in the CCTV cameras installed inside the bank. I applied a RTI Application to get the copies of videos that are recorded in the CCTV cameras. Then I also sent a complaint to Bank Manager regarding the same on April 25, 2014. I received an acknowledgement from the Branch Manager on April 30, but no action has been taken.

Hence on May 4, 2014, I escalated the complaint to Regional Nodal officers and Central Nodal Officers.

The Bank Manager & Assistant General Manager visited me in home to compromise me on the issue and to close the complaints. They even accepted that I was physically harassed by the IOB staff, But told that they doesn’t know that I got punched by the IOB staff. I happened to record the whole conversation that I had with the Chief Manager and AGM. After the visit, I received a response from AGM that they assure they will provide the best service.

Since I was not satisfied with the response, I escalated the complaint to Banking Ombudsman via mail on April 30, 2014. And a detailed complaint with all necessary evidences, copy of older correspondences with the bank was sent on May 20, 2014 via Registered Post.

On June 25, 2014, Banking Ombudsman rejected our complaint for unreasonable grounds. So an appeal was made to the Appellate Authority (Deputy Governor) of Banking Ombudsman (copied to RBI Governor) on July 26, 2014. But the Appellate Authority rejected the appeal stating unjustifiable reasons. Due to the biased act of Banking Ombudsman (RBI), I made complaint to President of India, Ministry of Finance, Central Vigilance Commission, Central Bureau of Investigation, Directorate of Public Grievance (Cabinet Secretariat) for exposing their illegitimate decision.

I also made a complaint (904/22/13/2014) to National Human Rights Commission for physical and mental harassment. It directed the Ministry of Finance to take appropriate action within 8 weeks and give intimation about the same in a letter dated June 23, 2014. Meanwhile we also sent a complaint with more details via mail on June 18, 2014.

For all the pressure we created over Ministry of Finance, I finally received a response from them. They quoted totally unexpected response from the Chief Regional Manager. Quoting the words of response here: “There is no human right violation in the incident but also it is a matter of harassment by the complainant i.e. Mr. S. Alexraj to cover up his misbehavior in the Bank premises in that date.” The response from the Chief Regional Manager was that I was photographing the lady staff members of the bank. They are openly trying to frame me to cover up their wrong doing.

J1 Police station received direction from Commissioner Officer via DGP office, but we are not sure from where the complaint was forwarded to DGP Office. The direction was to take action and submit `action taken` report. On Sep 23, 2014, I was called by Special Sub Inspector (SSI) to enquire on the issue.  I then went to Police Station and elaborated the issue to SSI. We are yet(Oct 1, 2014) to hear from Police.

A plain blank A4 Sheet

We followed up the RTI (to get Video footage) with First Appeal on May 30, 2014 and Second Appeal on July 10, 2014. Central Information Commission summoned for hearing on September 8, 2015. The hearing was okay and the Information Commissioner, Shri Sharat Sabharwal announced to provide us the CCTV Footage citing the following reason: He don’t believe  that the release of CCTV Footage of the public area of the bank would compromise any of its operation, in any case activities in the public area of the bank are open to the eyes of all the persons visiting the bank, which he already cited in CIC/VS/A2013/000889/SH.

We were happy about the announcement of Information Commissioner and was eagerly waiting to see the CCTV footage to prove the guilty of Bank employees.

PS: The exam, for which I went to pay the fee and the whole issue started, was cleared with good marks.