Another regular complaint that people of India daily faces.

Its Bus D70, which is supposed to stop at Kasi theatre Stop, Ashok Pillar, Chennai. Even Ticket was issued with Kasi Theatre printed on it. But the driver crossed the bus stop without stopping there. When our volunteer enquired, the conductor said it wont stop there without any reason. After a mini argument, the Conductor went on further and said “Complaint on me, if you want.”

So our aggrieved Volunteer did just the same. Files a complaint on the Driver and Conductor for the same and sends a RTI Application enquiring the operation procedures, training given to Bus Drivers and Conductors, plans to tackle overcrowding. 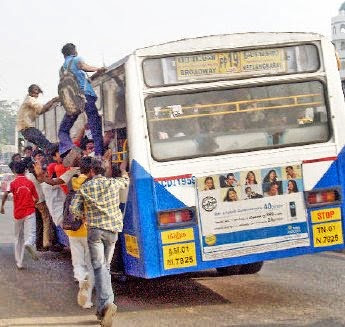 The RTI has been answered on February, 2013 explaining the following:

Also the Driver and Conductors are strictly warned and told to stop at all bus stops after 2 months of Complaint.

Then another RTI has been applied by June, 2013 to enquire about the cases filed on MTC for various Violations (in the time period April, 2012 to March, 2013) such as Red Signal Violations, Overcrowding, Vehicular Pollution and accident cases. For this RTI, we got the following response from MTC:
Link for Original RTI and Complaints